Keeping your PC running for multiple hours can affect its performance. Occasionally, a reboot or force restart is necessary to maintain stability. Other reasons for a Windows 10 reboot are errors, a frozen PC, and necessary restarts following the installation of different programs.

There are proper ways in which to reboot or force restart a Windows 10 computer. Without the correct care taken, your system could become erratic or begin to fail in other areas.

A PC reboot in Windows 10 is a simple process. There are multiple ways to accomplish a standard reboot that may be more beneficial based on your setup.

The most common restart method in Windows 10 is through the Start Menu.

Step 1. Left-click the Windows icon located at the lower-left portion of the Windows 10 desktop screen.

Step 3. From the options, choose Restart.

Another quick and easy method to reboot a Windows 10 computer, is using the Power User menu.

Step 2. Scroll over Shutdown or sign out, or press the U key to be presented with a few options.

Step 3. In the new window, you can click the Restart option or press the R key to reboot your Windows 10 computer. 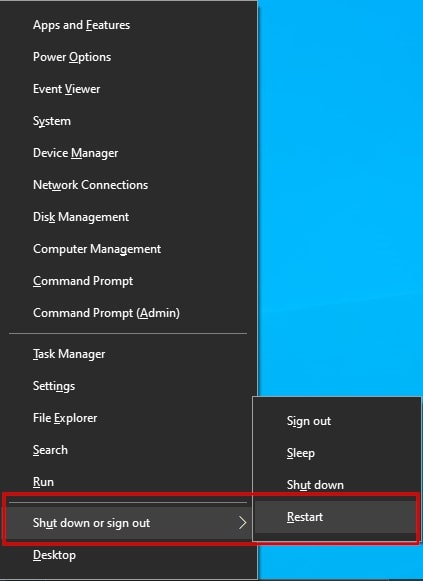 1.3. Reboot Windows 10 Computer in the Shut Down Windows Dialog

A lesser-known way to reboot a Windows 10 computer is through the Shut Down Windows Dialog. The method is most known for instantly closing down a program. However, after clicking free space on the desktop, Alt + F4 can be used to reboot your PC as well.

Step 1. Not all applications need to be closed to pull up this menu. Find some empty space on your desktop and left-click it. Failure to properly left-click empty space will keep your most recent window highlighted, which will result in it being closed when attempting the next step.

Step 2. Next, press Alt + F4 to open a new window titled “What do you want the computer to do?” 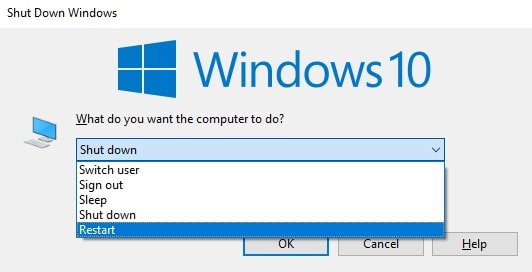 Step 3. From this menu, you can choose to Restart. Follow this up by clicking OK.

This next method uses a command line to restart Windows 10.

Step 1. Open the Command Prompt window. For this method, we’re using Command Prompt, however, the same command line can be used in the Run dialog box, as well as PowerShell.

Step 2. Type in the following command:

This will restart your computer. Alternatively, you can power down your Windows 10 PC by changing the ‘r’ to an ‘s.’

To force a Windows 10 restart from a command line, replace the end letter with r-f.

The ‘f’ in this case stands for “force.”

A force restart on a Windows 10 computer should be seen as a last resort following the above-attempted methods. You would typically attempt a forced restart if your PC was locked up or frozen, or the above methods haven’t worked.

Often referred to as “Security Keys,” the Ctrl + Alt + Del keys pressed simultaneously will take you to a blue window. It’s in this window that you can lock your PC, switch or log out the user, and restart or power down your computer.

Step 1. Begin by holding down both the Ctrl and Alt keys, then press the Del key. Should the window not pop up, repeat the process.

Step 2. On the blue screen, you’ll see a few options at the center. Ignore these options for now and look to the lower right portion for a set of icons. Click the Power icon.

Step 3. You’ll be given the choice of Sleep, Shutdown, and Restart.

If your mouse has died or your computer doesn’t have one plugged in, you can use the arrow keys or Tab key to shuffle through the options until you have the one you want highlighted. Press Enter to select it.

Once powered down, wait approximately 10 seconds to allow your computer to “breathe,” then power it back on.

When Is A Forced Restart Needed Over A Standard Reboot?

You should only force a restart if your PC has locked up, has had a major malfunction, and all other methods for a standard reboot have been exhausted.

How Will I Be Able To Restart My Windows 10 Computer Without A Mouse?

Some of the above methods already offer you the necessary steps to take should you fall into this scenario. If you need to open the Start menu, use the keyboard shortcut Ctrl + Esc. You can swap sections by pressing the Tab key, and navigate using the arrow keys.

How To Perform An Emergency Restart On A Windows 10 Computer?

The primary reason for an emergency restart is when the system will not respond to mouse clicks and appears frozen or continues to freeze intermittently. To perform an Emergency Restart, follow the Ctrl + Alt + Del method. Instead of clicking the Power icon and selecting Restart, hold down the Ctrl key and left-click the Power icon.

This will pull up an emergency restart window, warning you that all unsaved data will be lost should you wish to proceed. Click OK to perform the restart.

When a reboot or forced restart is necessary, these methods will provide the best practice. Not all of them are needed, so determine which of those above is most comfortable. Understanding which method is best at the moment and when it should be used will save a lot of time and headache in the future.