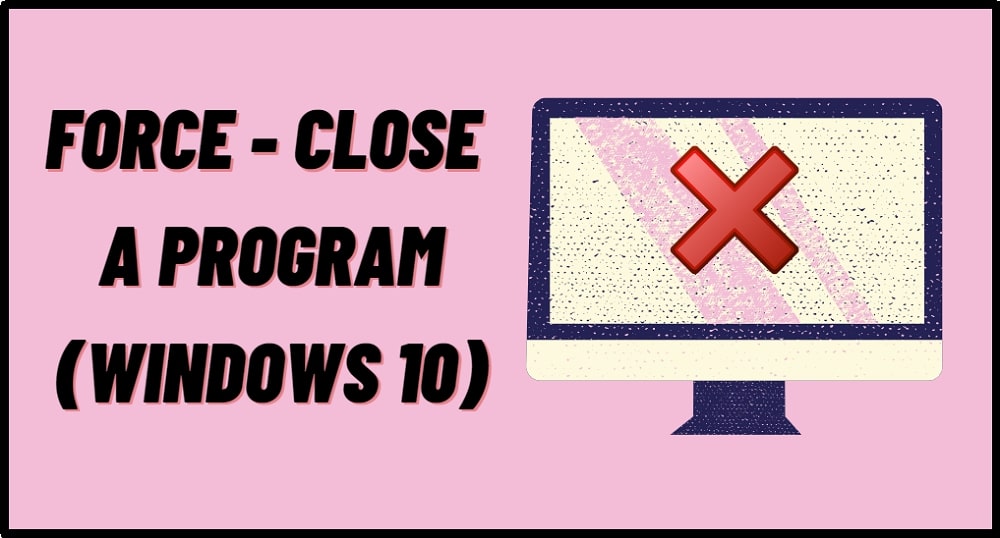 Scroll down to find how to force close a program on Windows 10; this guide includes all the methods — from easiest to most efficient — to force quit an app on Windows 10.

Method 1. Force Close a Program on Windows 10 with a Keyboard Shortcut

Keyboard Shortcuts are a longstanding go-to approach of many users to perform pre-programmed action efficiently; be it for opening programs or performing tasks like copy and paste, defined keystrokes come in handy. Further, you can also employ such combinations (of keys) to exit a program or application when it isn’t responding or when you want to take a mouse-free approach for closing a program.

Here are two such time savers that can help you force close an app on Windows 10:

One of the most basic troubleshooting steps that most of you might be familiar with is the Alt+F4 hotkeys. While Alt plus F4 keystroke is just equivalent to clicking on the X (Close) icon, you should at least give it a try when an app starts shivering.

Follow these simple steps to learn how to force close a program on Windows 10:

Step 1. Select the application that you want to close by simply clicking on it.

Note: For Windows to recognize which program to close, you must click on the program. For instance, if you have selected something else, Windows will close that instead (sometimes, without warning).

Moreover, it can also command a Windows shutdown (with a warning, though).

Step 2. Press Alt +F4 hotkeys simultaneously, meaning, when you press the Alt key, continue to hold it and press the F4 key. 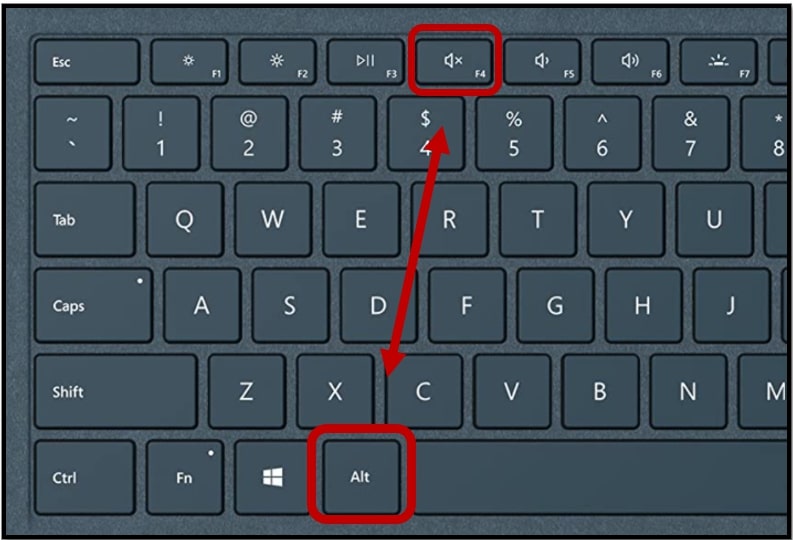 If a program refuses to quit when you press Alt plus F4, it doesn’t mean that you did not execute it correctly. As stated, Alt plus F4 is not that powerful, and when pressed, Windows only requests the application and programs to quit, and it is up to the programs and applications to answer that request or not.

If Alt plus F4 did not work for you, scroll down to learn other ways of how to force stop an app on Windows 10.

While Windows has hundreds of pre-defined keyboard combinations, you can also create custom shortcut keys and do pretty much anything. The initial steps to create a custom keyboard shortcut might seem tedious to some, but once generated, you will reap its benefits for a long time, as, unlike the earlier shortcut key, this one is more commanding and compelling.

Follow these simple steps to learn how to force quit an app on Windows 10 using a custom created Keyboard shortcut:

Step 1. Hover to an empty space on your desktop screen and right-click to open the context menu.

Step 2. Go to the New option, and from the pop-up menu, select the Shortcut option.

Step 3. In the Type the location of the item box, type or copy and paste the following text: 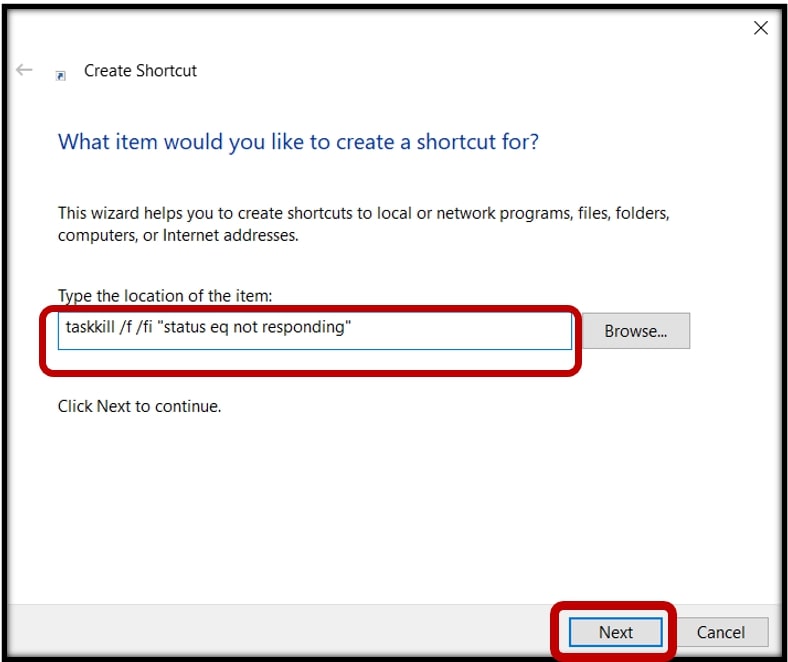 Step 4. Enter the name of your choice and click on Finish. 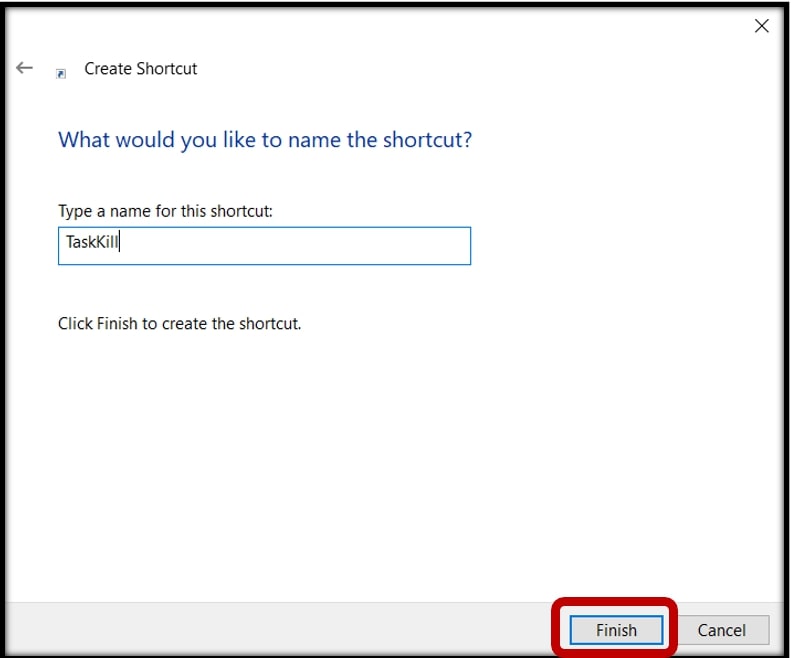 While you can leave the shortcut like that and click on it whenever you have to force-close a program, you can also create a custom shortcut to make the process easier.

Step 5. Right-click on the created shortcut and select Properties.

Step 6. Press any key of your choice, and Windows will automatically assign the key preceded with Ctrl+Alt; for instance, if the preferred key is R, you will have to press Ctrl+Alt+R to force-close the chosen program. 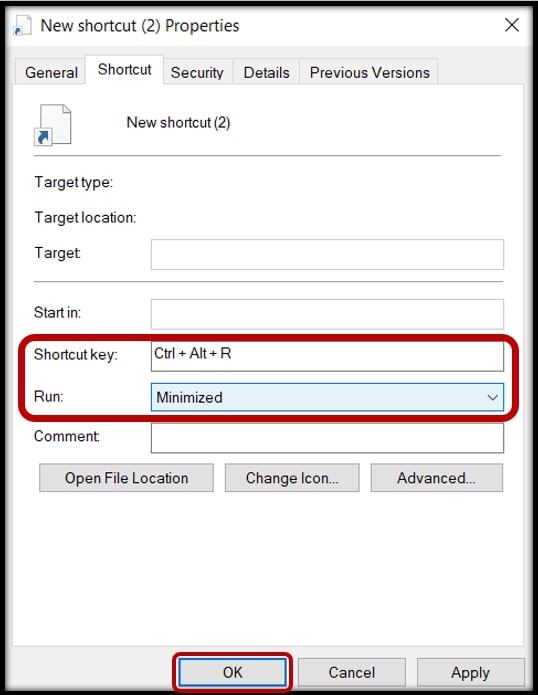 Step 7. Also, select the Minimized option in the Run box.

***Why Minimized? Opting for this option will not initiate the command prompt (on the screen). If you leave it to Normal Window, you’ll see a brief flash of command prompt whenever you click or use the custom-created shortcut key.

You can type in any of the two keyboard shortcuts to force close an app on Windows 10. The first one might not be that effective, but the custom-created shortcut key, in most cases, will be responsive, and you will be able to close a program whenever needed by using it.

Task Manager gives you information about the running tasks and computer performance such as CPU load, I/O details, etc. But besides giving you the information, Task Manager also lets you control processes and terminate ongoing tasks.

Follow these simple steps to learn how to force close a program on Window 10 using the Task Manager:

Step 1. Press Ctrl+Shift+Esc hotkeys at once to directly open the Task Manager. 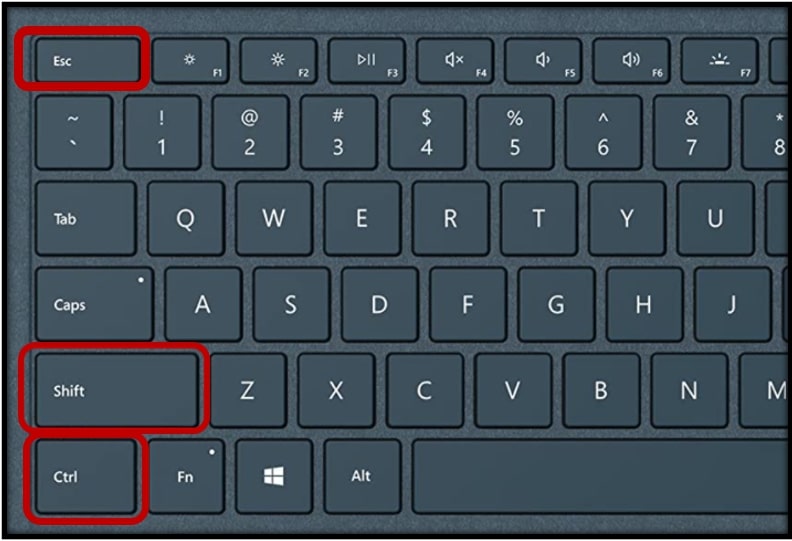 Alternatively, you can press Ctrl+Alt+Del keys (at once) and select Task Manager to open it.

Note: If the Task Manager on your computer displays only the name of the programs, click on More details (in the bottom-left section) to get a full view of the apps and background processes.

Step 2. Under the Processes menu, select the application that you want to force-close and click on the End task option (present the bottom-right corner of the Task Manager).

Alternatively, you can highlight the unresponsive application, right-click on it, and then choose the End task option to force-close the desired program.

Task Manager is the most popular choice among users for force-quitting a program, but sometimes, even it ditches your requests. Scroll down to find another effective solution.

While Keyboard Shortcuts and Task Manager are the popular ways to force-close a program, you can also use the versatile Command Prompt to achieve just that. Command Prompt is the ideal choice for users who want to know how to force close a program on Windows 10 without the task manager.

Follow these simple steps to learn how to force close an app on Windows 10 using the Command Prompt:

Step 1. Open the Run box by pressing Win+R (Windows plus R hotkeys) at once.

Type in cmd and press Enter.

Read More: How to Open Command Prompt in Windows 10

Step 2. In the Command Prompt, type in tasklist and press Enter. Executed correctly, you will see all the tasks and background processes, even the unresponsive ones.

Also, do not forget to leave a space between taskkill/im and the image name.

If executed successfully, you will see a message displaying something like this: SUCCESS: Sent termination signal to the process “YourPhone.exe” with PID 11952.

***The Image name and PID (process ID) will differ depending on the program you choose to force-close.

FAQs about Force Quit an App on Windows 10

1. When should you force-close a program or application on Windows 10?

While Windows, in most cases, informs the users about when an application becomes unresponsive, sometimes it ignores to display any warning and starts acting crazy. Be that as it may, here are some signs that can help you decide when to force-close a program on Windows 10:

2. Why do applications and programs become unresponsive?

While there are numerous reasons — ranging from OS to Network issues — these are some of the prevailing reasons why Windows apps are unresponsive:

3. What to do if apps are unresponsive often?

If you do not encounter app failures regularly, a Restart or any of the mentioned ways to force-close an app on Windows 10 should do the job. However, when the issue is prevalent, you will have to take immediate measures as delaying to repair the PC can cause irreparable damage to the data present on the device. Try:

If you continue to face the issue, contact Microsoft Support or consult a computer technician.

4. Is there a third-party application to force close an app on Windows 10 without the task manager and command prompt?

Yes, SuperF4 is a free application that you can download and use to force quit an app on Windows 10. SuperF4 too employs a keyboard shortcut — Ctrl+Alt+F4 — to force close an app; however, this is similar to the second keyboard shortcut key discussed in this guide. And, like the custom-created shortcut key, even SuperF4 has limitations; for instance, if an application has anti-keylogger protection, even Ctrl+Alt+F4 will not work. So, it is best to use the custom-created shortcut key.

Out of all the methods of how to force close an app on Windows 10 — Custom Shortcut Key and the Taskbar are easier to employ; however, the Command Prompt, though a hectic process, is effective as well. If none of these works, you can always Reboot or Restart Windows 10 — using the Power button.